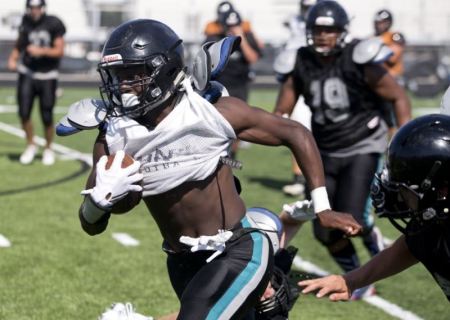 About 200 Southwest Florida high school football players flocked to USF’s satellite camp at North Fort Myers High School last Sunday, the fourth straight year the University of South Florida has hosted a football camp in the Fort Myers area. Players picked up techniques, and were given the opportunity to be evaluated by the University of South Florida’s Division I staff.

USF Head Coach Willie Taggart added this about hosting the satellite camp in Fort Myers, “It’s been successful for us and for young men as well,” Taggart said. “I think it’s something we’ll do every year. It’s great for the game. It gives us opportunities to teach kids and help the game.”

Two players Coach Fominaya brought up from Naples-Gulf Coast made strong impressions on Willie Taggart and the USF staff, each earning scholarship offers from the Bulls.

RB DeMarcus Townsend (Naples-Gulf Coast) is of particular interest to me because I sent his tape over to USF after speaking to his father and former head coach before he transferred from my Alma Mater St. John Neumann following his freshman year. Townsend (5’11, 192 pds.) toasted the field, including standout Fort Myers RB Darrian Felix, to win the USF Fort Myers Satellite Camp 40-yard dash crown.

Townsend is chomping at the bit for the start of his junior season, after an injury that left the Shark’s playmaker sidelined for five of 11 games in 2015. Despite the limited field time, Townsend exhibited glimpses of his immense talent, slashing for 262 yards on 25 carries (10.5 yds./car.) and scored four touchdowns. (HUDL Highlights)

Townsend surged on to the recruiting scene after a monstrous performance at the 2016 Miami Nike SPARQ Combine, posting a scorching 4.40 40 yard dash, 4.1 shuttle, and a 41-inch vertical leap. He finished in the 97th percentile in the powerball throw after launching it 38 feet, and ranked in the 99th percentile of all athletes in three of the four events.

I reached out to Townsend to gather his thoughts on the USF offer, and to find out which coach extended the offer. Townsend responded, “[I] just feel blessed and it’s starting to feel like all of the hard work is paying off, but [I] still have to work even harder. Coach [Raymond] Woodie reached out to offer me.”

Next, I asked Townsend how long USF has been recruiting him, and interest in playing at USF? Townsend added, “I’ve been recruited by USF since 8th grade, and the interest [in playing for USF] is there, but I have to wait to see what other options come down the road so I can make the best decision for me.”

Townsend currently holds five offers from South Florida, Iowa State, Appalachian State, Southern Miss, and Eastern Michigan. I expect Townsend to become a big time name over the next two years, so the USF staff needs to plan several trips down to Naples to reel this playmaker in come National Signing Day 2018.

Blessed to receive my second offer from the University of South Florida!!! pic.twitter.com/D3qsqWzoxG

Offer number two went to lengthy TE George Takacs (6’6, 235 pds.) after he displayed impressive route running, allowing the class of 2018 standout to toast defenders in one-on-one drills. Most importantly, Takacs showcased his superior hands, pulling every pass down in front of the USF coaching staff. 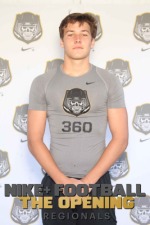 Takacs currently possesses two scholarship offers, the first came from Southern Miss, and the latest South Florida. Takacs quite literally has a big upside with his 6’6 frame and I have a feeling other suitors will come calling very soon.

DeMarcus Townsend and George Takacs are both names to remember, and I will certainly be keeping a watchful eye on them both this season when I plan to head back home to Naples to take in couple of games.
—
Coach Taggart ended the camp in a class manner, representing all real men.

Before post camp huddle ended, USF coach Willie Taggart asked all the boys to look at him directly. He said, 'Respect women.'

© 2012-2016 SoFloBulls.com™; SoFloBulls Blog™. Material in any right may not be reproduced without expressed written consent of Matthew Manuri. All rights reserved.